It’s been a little over a month since returning from Chamonix and it’s now nearly time to head off again. This time I’ll be heading out to the incredible Yosemite Valley in California to climb what is arguably the most famous rock route in the world “The Nose” on El Capitan. My last two trips to Yosemite have been with my brother Niall, but this time I’ll be joined by my dad who will accompany me up the 3000ft of granite over 3-5 days. Below are a few shots from our trip back in 2009. 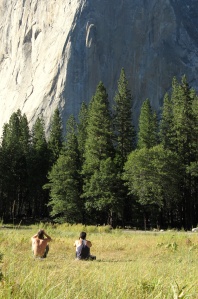 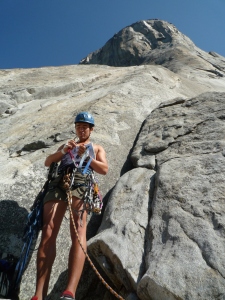 The last month hasn’t been without excitement itself. The big news for me is that Mammut have taken me on as one of their “Sponsored Athletes” and will be supporting me with my future expeditions.  Mammut specialise in producing high-end Alpine climbing equipment so have been able to kit me out with everything I could ever need, so for the first time ever I’m actually looking well equipped!

Climbing wise, I’ve used this month of relatively good weather to make the most of my local crag, Nesscliffe. I’ve established a new boulder problem at the Little Northumberland area named “The One Pinch Punch” which goes at about V7 or thereabouts. It’s now had a few repeats from Angus Kille and Nick Dixon, and although not especially hard the consensus is that it’s a nice new addition to the area.

Feeding off Angus Kille’s enthusiasm and superb beta (route description) I headpointed “Marlene Direct” E7 6c on a boiling hot day a few weeks back. This is an absolutely stupendous route which climbs the Marlene Arête in its entirety, climaxing at the very top with some perplexing moves to pull through a near blank section of rock.  I used “Red Square” E1 5b, as a cool-down lead and was reminded of just what an amazing route it is itself; certainly one of the best routes of its grade I’ve climbed anywhere in the country. Below are a few shots and a video of the ascent of Marlene Direct. 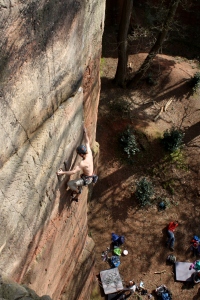 The Hamer brothers, Sam & Ed, made a three day visit over the Bank Holiday Weekend and as usual made quick work of a number of the crag’s hardest routes. Between them their most impressive ascents included “Il y a Stazi” E8 6c, “Une Jeune Fille” E8 6c, “Berlin Wall” F8a and “Subtilitas” V9. I personally dedicated my time to climbing Berlin Wall which has ended up being a bit of a mission! Although I got it all worked out very quickly on an abseil line, I keep on messing up on the last move when attempting to lead the route. Now thwarted by poor weather I’m going to have to wait until returning from Yosemite before giving it another go. 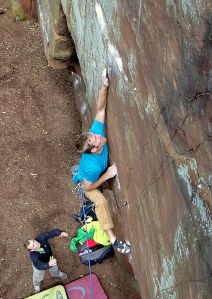 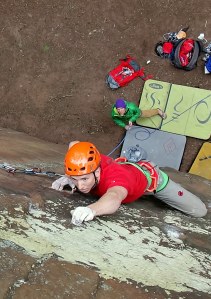 Also worth mentioning is that Ed Booth and Angus Kille climbed “Une Jeune Fille” E8 6c, during the Bank Holiday Weekend as well. Impressive ascents of a route which until that weekend had only been repeated once since its first ascent back in 2006.

The single highlight for me over this past month was a team ascent of “Notional Trust” E5 6a, along with Ed Booth and Sam Hamer. This route takes a convoluted line up the wall to the right of Red Square and definitely feels like a bit of a marathon to get to the top. Ed had climbed the route a few years back so went first making a retro-flash in fine style; Sam and I then followed to each make flash ascents.  An absolutely superb line!

Right, I’ll leave it at that for now. I return home from the States at the beginning of June and I’ll be sure to post an update. Until then though, enjoy the rest of May!