Hi everyone! It’s now less than two weeks until Niall and I depart for our big Greenland expedition and the planning and preparation is reaching a state of fever pitch! This is going to be the first of two blogs that I write over the next week; my aim today is to introduce the third and arguably most exciting component of our upcoming expedition… speedflying.

Before I describe what exactly speedflying is, I quickly want to explain why it is that I’ve decided to introduce a new discipline into my trips away at all. So, I can basically attribute it all to picking up an injury seven months ago, not an exciting injury as such, but one that meant that technical, tips of the fingers climbing, has been out of the question. Basically, I trained a little too hard and developed acute tendinitis in my right hand which resulted in severe pain whenever I tried to use one finger in particular. On picking up the injury, I was immediately aware that it was going to take a while to recover, so I decided that I could either sit at home doing nothing or I could learn a new skill.

As it was, because of the awful weather we’ve had, I pretty much did just sit at home doing nothing… but in between work and bad weather I have managed to get out enough to feel that I’m now ready to use my new found skills in anger!

So, speedflying is basically paragliding, but with a wing that has just a fraction of the surface area.  The result of this is that a) it weighs next to nothing, and b) you go really fast. Basically the perfect combo for descending off a mountain that you’ve just climbed. The speedwing can be launched on foot, or on skis; the latter allowing you to rapidly descend terrain via a combination of skiing and flying. Awesome!

My training started by sneaking around the Shropshire hills, hurtling off the slopes and trying to avoid getting caught by land owners. By far the most valuable training though took place in the Chamonix valley under the incredibly capable supervision of my good friends Tag and Elling from Norway.  These guys are helicopter pilots by profession which basically gives them loads of free time to get outdoors and scare themselves silly; they are both incredibly experienced skiers, climbers, windsurfers, BASE jumpers, sky divers and most importantly… speedflyers!

Below are a few shots from the trip courtesy of Tag, and some screen grabs from my head cam. 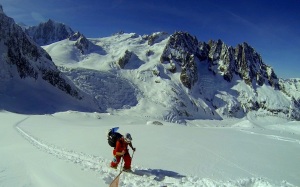 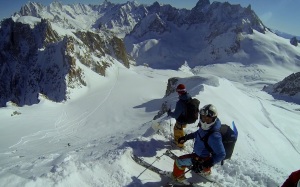 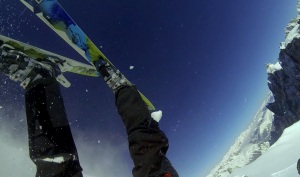 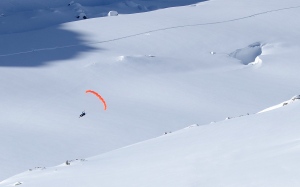 On returning to the UK I immediately downsized to a smaller wing, basically so that I can go faster, and hooked up with Niall to have a play back in the hills around Shrewsbury. 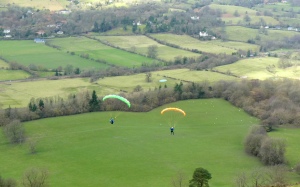 The wing is currently in the repair shop as a result of a frustrating incident that occurred last week on the summit of Snowdon, but will be packed up and ready to rip up the Greenlandic skies in two weeks’ time!

I once again want to draw everyone’s attention to the fantastic charity ‘Climbing Out’ who I’m raising money for in memory of my Dad. Please donate what you can for a fantastic cause at www.justgiving.com/Finn-McCann.

Huge thanks must go to Tag and Elling for being legendary mentors, Muzz for his awesome company as always, and lastly UK Airsports and NEO for their flying kit contributions.  Stay tuned for a short film documenting Niall’s and my training over the past few months.