Last year I sustained some serious tendon damage to my right hand meaning that I was forced to take 12 months out from rock climbing. At first I was understandably devastated as rock climbing brings me so much happiness and fulfilment on a regular basis, but it wasn’t long before I opened my eyes to the opportunities that came hand in hand with this set-back.  Because I wasn’t going to be able to rock climb I figured I may as well dedicate myself to learning a new skill which one day could compliment or even enhance my climbing exploits. So that’s the back story to how I got into speedflying.

This spring’s expedition to Greenland opened my eyes to the unbelievable fun that can be had when combining mountaineering and speedflying. My mission now is to really push this discipline, which I’ve named ‘Speedwing Alpinism’, to a whole new level.

A few weeks ago I drove out to Chamonix with my alpine climbing buddy Wilki to explore the possibility of foot-launched speedwing alpinism. Up until now all the alpine launches I’ve done have been on skis, but this itself precludes you from climbing particularly technical routes (climbing with skis on your pack and ski boots on your feet isn’t fun). So our question was this: when attempting a flight from a snowy alpine summit, can we run fast enough to launch our wings by foot?
——————- 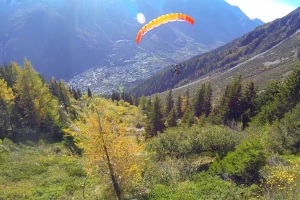 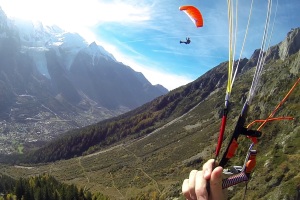 We intended to climb the North Face of the Grandes Jorasses and launch off the top, but a heavy dump of snow and a Northerly wind put an end to that plan. There are no North facing launch sites on the mountain, and the South side would have been dangerously avalanche prone meaning that we would have been climbing into a trap where we could neither fly off nor safely descend on foot to the South. So with only two days of good weather to play with we picked out the Eugster Direct on the North Face of the Aiguille du Midi. 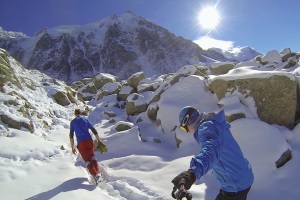 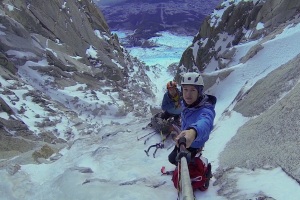 The climb got off to a bad start as I was hit in the shoulder by a head-sized lump of granite which had fallen from 20 metres above me. The impact knocked me off my feet leaving me hanging upside down from my ice-screw and ripped a hole through three layers of clothing. At least it didn’t hit me in the face! Adrenaline got me through the rest of the day as my shoulder slowly stiffened up. 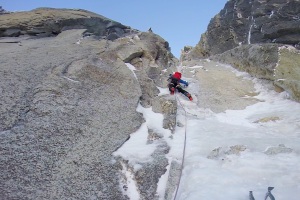 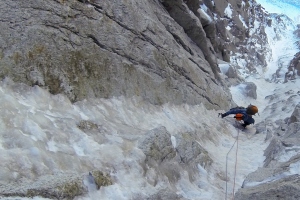 The rest of the route went wonderfully smoothly. The route was in pretty good condition with only a few sections of very thin delicate ice which had to be climbed with great care, despite this we climbed fast and topped out onto the summit ridge before 3pm.  Out came the wings and we scouted out a good launch area. Wilki drew the short straw and launched first, then it was my turn. I must say it felt amazingly un-daunting running off the edge of 1000m mountain face! The views were spectacular and I didn’t want the flight to end, but 8 minutes and 2,700 vertical metres later Wilki and I simultaneously touched down in Chamonix. 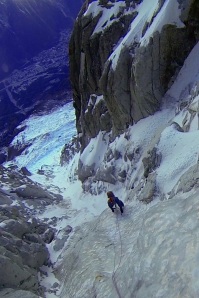 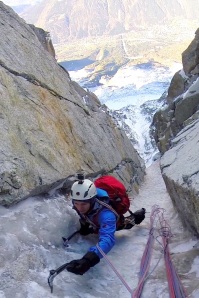 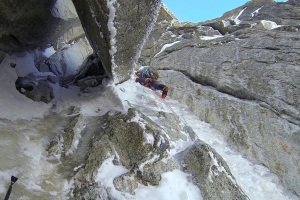 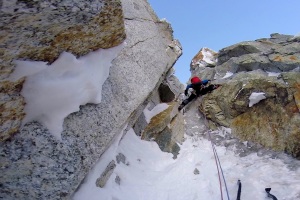 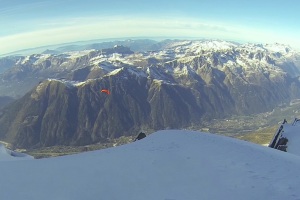 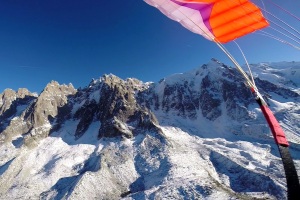 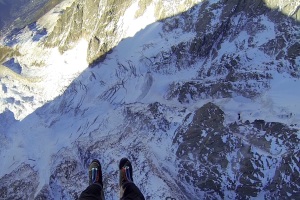 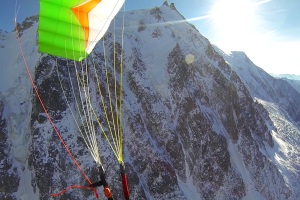 So, the experiment worked. Foot-launched speedwing alpinism is a goer! Now let’s see where we can take it!